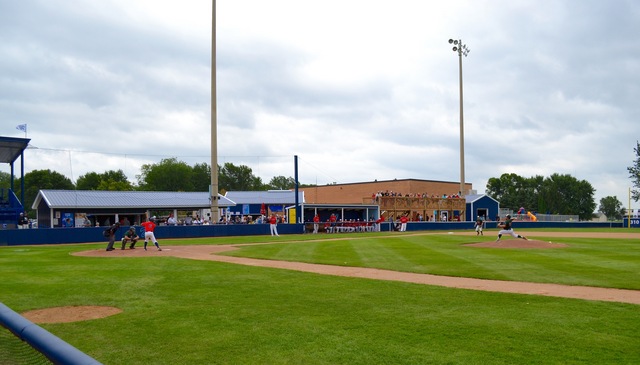 The Delano Athletics opened state tournament play with a 2-1 victory over the Sleepy Eye Indians on Saturday afternoon in Watkins.

Runs were at a premium as wind gusts exceeded 30 miles per hour. Athletics starting pitcher Jake Gleason kept tossed six innings, giving up no runs. Sleepy Eye starting pitcher, Sean Mathiowetz limited the Athletics to just six hits and one run and his way out of several jams, including a one out bases loaded jam. The Athletics left 10 runners on base in the game.

The first run of the game was scored in the bottom of the fourth inning when Trevor Jaunich led of the inning by taking one for the team with a hit by pitch. Jaunich advanced to second on a successful sacrifice bunt by Jay Stevens. Jesse Berg singled to advance Jaunich to third. With runners at the corners, Jeff Althoff came to the plate and reached safely while scoring Jaunich from third base on a fielders choice groundball. 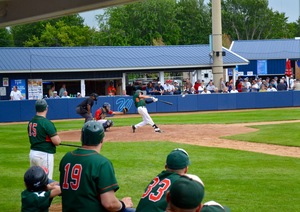 With the Athletics clinging to a one run lead in the seventh inning, Toby Hanson stepped to the plate with one out and ripped a home run over the right field fence and provided the Athletics with an insurance run and the Athletics led 2-0 after seven innings.

The Athletics would survive a late rally from Sleepy Eye when they cut the lead to one run in the ninth inning, but with a few tremendous defensive plays from Jay Stevens at second base and Adam Schleper at shortstop the Athletics escaped with 2-1 first round victory in the Minnesota Class C state amateur baseball tournament.

In relief, Trevor Jaunich picked up a three inning save for the Athletics. Jaunich gave up one run on three hits.

The Athletics next game will be Saturday, Aug. 29 at 5:00 p.m. in Watkins versus the New London-Spicer Twins.